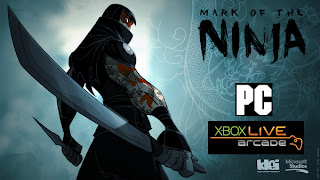 Ever played a stealth game, or a game with stealth, get caught, and predictably yell “How did they see me!?”. I know I have, but I promise you that you will not find yourself yelling that when you play Mark of the Ninja. Why? No, it’s not because there’s no stealth in the game. It’s because Mark of the Ninja finally cracks the secret code to make stealth enjoyable and easy to execute.

The vibrant and colorful art style of Mark of the Ninja is, in great part, to thank for the great stealth system. Whenever you are visible, the main character is colorful; however, when you are stealthed and invisible, the character is completely black.  This, in combination with the easy-to-see vision cones coming from the enemies, makes it super easy to know whether or not you’re going to be seen in a situation.

Additionally, the game boasts a line of sight mechanics that creates some interesting situations.  Again, the art style helps in this.  While you lack the power to see through walls and obstacles, the main character’s keen hearing is represented in footfall animations that let you know where that guard on the other side of the door is walking.  Keep in mind though, if you don’t walk quietly, the guards will hear you as well.

While the game has great stealth mechanics, the game gives you options as to how to approach a challenge.  The game has many tools to choose from, ranging from spike traps to smoke bombs.  You also have a handful of shurikens you can throw simultaneously to knock out lights and distract guards.  You can choose whether you want to slay all your enemies in a given level, or whether you prefer going the ghost route, as if you were never there.

As you progress through the game, you will gain experience which will allow you to acquire different techniques.  These techniques vary from tool upgrades to situational stealth kill maneuvers.  If you go that route, though, be prepared to hide those bodies!

Mark of the Ninja can be found on PC and on Xbox Live Arcade.  It’s 1,200 Microsoft points on the Xbox, and there is a demo that you can try out before you buy it.  You won’t regret it!  Here’s the trailer: