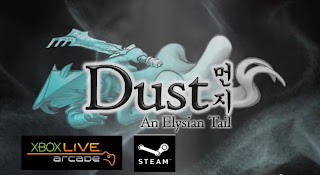 There’s a game I played back toward the beginning of June that I was falling over myself to talk about with my friends.  Unfortunately, I probably did not do a great job of explaining it to them, as they were not clamoring to play it as I had hoped (perhaps my persuasive skills need work).  I’m hoping I can redeem myself here and possibly get some people to give this great little game a try.

The game I’m speaking about is Dust: An Elysian Tail, a game that came out on xbox live arcade back in August 2012 and just recently came to the PC Steam platform in May of this year. Dust was extremely successful and garnered high praise from the gaming community.  What is so amazing is that the large majority of the game was developed by one individual.

The only caveat with Dust’s release was that the internet was critical of one singular aspect of the game.  The internet seemed to be hung up on the fact that all the characters were types of animals but of a bipedal nature.  This of course sent the internet into a frenzy with the use of the word “furry”.  However, I found it to be a moot point. There are plenty of games with walking and talking animals, and I don’t see how this game is any different from those.

Dust is a side scrolling beat-em-up RPG with an intricate combo system.  It doesn’t stop there though; the art direction is phenomenal, the game is extremely colorful and pleasing to the eye, and the animation quality is nice and smooth. The voice acting is top notch and very uplifting; the goofy characters and the way they interact with each other will have you grinning and chuckling to yourself   The story, while seemingly light-hearted and silly, quickly becomes serious, dark, and very interesting.

The combat is pretty damn fun too, and pushes you to get higher and higher combos as you progress.  You’ll have plenty of opportunities to do so, too, as there are monsters everywhere that are eager to taste your blade.  There is also an involved crafting system that allows you to take monster parts you’ve looted along the way and make some powerful equipment.  Not to mention, there is a leveling system like any proper RPG.

Even though the game is in a 2 dimensional plane that does not keep the game from encouraging frequent exploration and optional quests.  The game is very reminiscent of the “metroid-vania” type of game that fosters exploration gated by the acquirement of new abilities or tools.  You are well rewarded for your trouble as well, with additional loot, equipment, or even stat bonuses. In a way, Dust is a sort of 2 dimensional open world game.

Here is the launch trailer, it shows examples of the combat and even some of the platforming challenges you’ll come across:

2 thoughts on “Dust: An Elysian Tail”