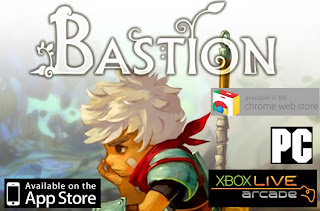 I suppose in an age where we are practically inundated with countless games, it can be hard to get to all the great ones.  Especially with the emergence of the independent game scene, I’m even hard pressed to play them all, and I play far too many games.  My Steam library literally has over 50 games that I have yet to even install.  Fortunately, despite that problem, I managed to pick up Bastion and play it, and I quickly became upset that I had played the game quite a time after its May 2012 release on Steam!

Bastion is by far one of my favorite games I have ever played.  I do not say something like this lightly, as the amount of games I’ve played in my time attests.  The story is solid, the gameplay is fun as hell, and the narration is so good that I almost don’t have words.  Not only all that, the soundtrack is one of the only video game soundtracks I find myself listening to on a regular basis; it’s that good!

The game takes place in a world that has just had an apocalyptic event called the ‘Calamity’ that has resulted in a fractured and empty world.  This Calamity has snuffed out the majority of human life, and has driven the remaining indigenous species berserk.  You play a silent protagonist named simply, ‘the Kid’.

Even though the game has the cliche silent protagonist, that doesn’t make the game devoid of a voice.  As you make your way through the story, the narrator both entertains and enlightens you slowly about the world and what exactly has happened.  At times, the protagonist is funny with well timed comments; however, at other times, he is morose, lamenting a time before the Calamity.  You quickly start craving for every morsel he has to share as you make your way through Bastion’s world.

Speaking of Bastion’s world, the art style is colorful and vibrant and even works into the story.  The Calamity has upset the very balance of this world, and the gameplay consists of you traversing floating landmasses that appear from below as you walk across.  The smooth transition and animations make this mechanic enjoyable to play and watch.

The gameplay can be described as an isometric, top-down, beat ’em up.  There’s also some RPG mixed in, including a leveling mechanic and weapon upgrades that you can mix and match.  The action is very fun and you’ll find yourself grinning to yourself as you listen to the immersive musical score that blends perfectly with the setting and action.

Bastion is definitely a game that every gamer should play, and fortunately, the game is extremely accessible!  It has been released on almost every platform, except for the PlayStation. You can find it on the PC and Xbox Live Arcade, as well as on IoS and Android devices! The game is very affordable and gives you a lot of content for the price.  I absolutely promise you will not regret playing it! (or paying for it) Also, Bastion is currently $3.74 on greenmangaming for PC until the end of today. (I would recommend a controller if playing on PC)

2 thoughts on “Bastion, a game you’d be crazy to not play!”